East Fork of South Fork of the Salmon River, ID 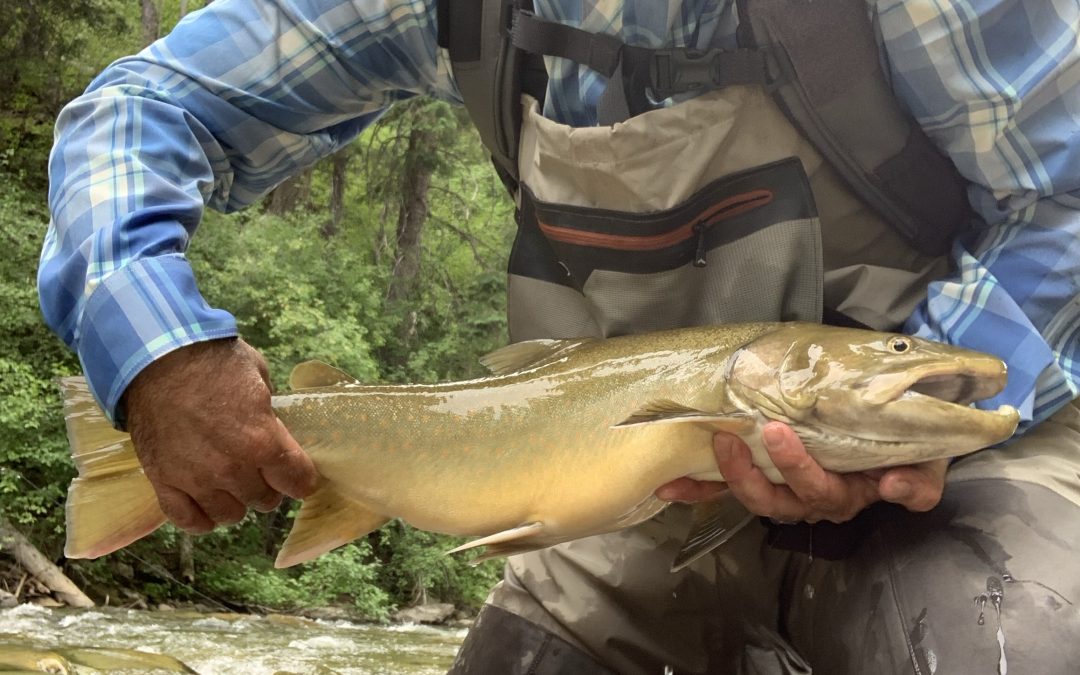 A bucket list fish for me has always been the Bull Trout. The Bull Trout is not actually a trout but a Char. They are hard to catch because of several factors. They are protected in certain states and targeting them is illegal. You are allowed to target them in Idaho though but catch and release is a requirement. They are migratory so targeting them in a certain area is difficult. They are carnivores once they reach a certain size and bugs are off the menu.

I started my journey in the city of Boise on the 1st of August. You would head north on state road 55. When you get to Cascade, ID you hang a right onto Warm Lake Hwy. You’ll end up hitting Johnson Creek Road and hang a left onto that road. This will be a 25 mile dirt road that will take you directly into Yellow Pine, ID. The East Fork of the South Fork of the Salmon River runs right through the middle of town. I headed right and upstream, and that’s where the adventure began.

I parked right up the road where the canyon opens up and decide to cover as much water as possible. I hit every pocket of water I could find till I saw a large log jam across the river. I was told that an olive and white dolly lama with a heavy cone head would be the best option. So I got rather excited when I saw the river running perfect and the habitat until I saw a fly line whipping on the other side of the giant tree. My heart sank that somebody beat me to it. Oh well more water to cover but first I have to go over the log and I ended up talking to the guy fishing. Right as I was finishing my conversation with him he hooked into a nice 23” Bull Trout right underneath the log. I helped him net it and took some pictures for him and went on my way with my spirits high.

As I worked upstream hammering hole after hole. I finally got a hit. I was excited thinking what could it be. Then my excitement went away when I ended up netting a small rainbow. I said to myself I drive this whole way to catch something I can catch anywhere, at least be a west slope Cutthroat. At least I didn’t get skunked then came through my mind

I headed upstream until I saw a bridge with a nice hole underneath and got excited again ( I should learn to not get my hopes up) I then saw an older gentleman who never saw a glimpse of me walk off the bridge right to the spot I was about to fish. He then saw me and said his hello’s and his I’m sorry did I steal your spot. I sat down to watch him fish dries (orange stimulator fly) and catch three small fish out of the area. Then he watched me throw meat and no trout for me. He told me to go right to Abstien Rd in the middle of town because that’s where he caught one earlier in the year. I headed there and headed down stream from where it crossed the road and talk about some tough fishing with amazing water habitat. Pocket after pocket of clean clear water. The walking was the tough part because of the steep canyon walls and fast running currents but I ended up landing, you guessed it, two more small rainbows

By this time it was about 1:00 in the afternoon and I had got there about 9:00am and frustration started to settle in. I have worked so hard, put in the miles and still have not reached my goal. So I thought maybe since it’s getting close to their time to spawn they are moving up river. So that’s where I headed. This is where all those miles paid off. I found a stretch of water where I could see big rocks and downed trees. Perfect Bull Trout habitat. I hadn’t had much luck with the Dolly Lama so I switched over to a white sex dungeon because the rumor I heard was they attack white

I threw it upstream of some big rocks with a little pool downstream and let it drift to the end of my line then strip, strip strip, BOOM! “Darn I’m snagged“, “why is my snag taking line” Big fish ON!!!!! After a decent battle and trying to keep her away from the trees and fast water I became the victor and my mission had been completed

After reviving her and making sure she swam off a giant relief went over me. All the research, all the miles, all the cracked shin on slippery rocks was totally worth this fish. I decided to fish my way up steam until I could get out easily. Two holes later, strip, strip BOOM!!!!!! This one was even bigger, stronger, faster. I had to walk the dog down stream and because he was trying to dart for cover and keeping him away from breaking my line was a must. With one big scoop on the net a 26” Bull Trout was officially caught

I watched him slip away into his pocket water that he called home and felt like I couldn’t get anymore happy from that day. Mission Accomplished, Bucket List Checked