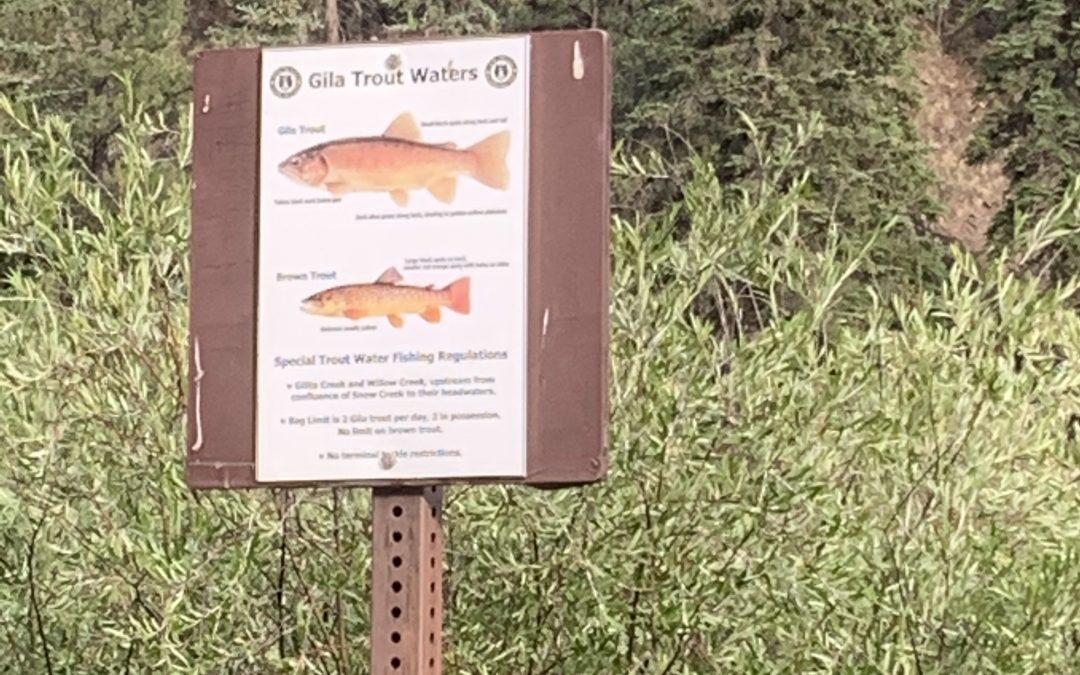 A place that holds a special place in my heart and always will is the Gila National Forest. The Gila is a massive National Forest and is one of the largest wilderness areas in the United States. By wilderness area I mean that there is no man made roads, campsites or luxuries. You have to pack everything in and out and you’ll basically hike on game trails once you enter in. This is where I learned to fly fish with my father, he would always say “hey, watch this and dip his fly into a certain spot and pull out a fish and laugh at me.

It’s a majestic desert forest full of Elk, Mule Deer and one of the rarest trout on the planet, the Gila Trout.  The Gila trout (pronounced He-la) is a beautiful small trout that has a yellow hue to it and is found in only a small number of streams in the Gila. It has to constantly battle with invasive species like the rainbow and brown trout, predators and stupid people that have caused forest fires that wipe out their habitat and choke the streams.

One of the places we used to fish quite often is the Willow Creek and Gilita Creek ( little Gila). Right now they are going through a restoration project because of the whitewater baldy fire that wiped out a massive portion of habitat. When I used to fish there there wasn’t a fish dam but one was recently added onto Willow Creek to keep rainbows coming up and hybridizing with the Gila. I have had most success for Gila Trout in my younger days on Gilita Creek so that’s where my adventure began.

Where Indian Creek and Willow Creek meet is basically the Beginning of Gilita Creek which flows into the Middle Fork of the Gila River at Snow Lake. There used to be a campsite there and there are still picnic tables there but it’s closed. If you need to camp, right up the road at Willow Creek is Ben Lily Camp Ground with bathrooms and everything. About 50 yards from where Willow Creek meets up there is a fish dam with a large pool underneath and has a couple fish in that pool. I worked my way down river from there finding small pools after tromping through wild rose bushes.

The stream is full of Gila Suckers and small chub that I don’t remember seeing in my younger years. Mixed amongst these fish are a couple Gila Trout here and there. Some of the fishing can be frustrating because of the smaller fish taking a fly or you’ll see fish and they end up being suckers and not trout. If you’re sneaky enough and talented enough you’ll be blessed with catching one of my favorite trout on the planet.