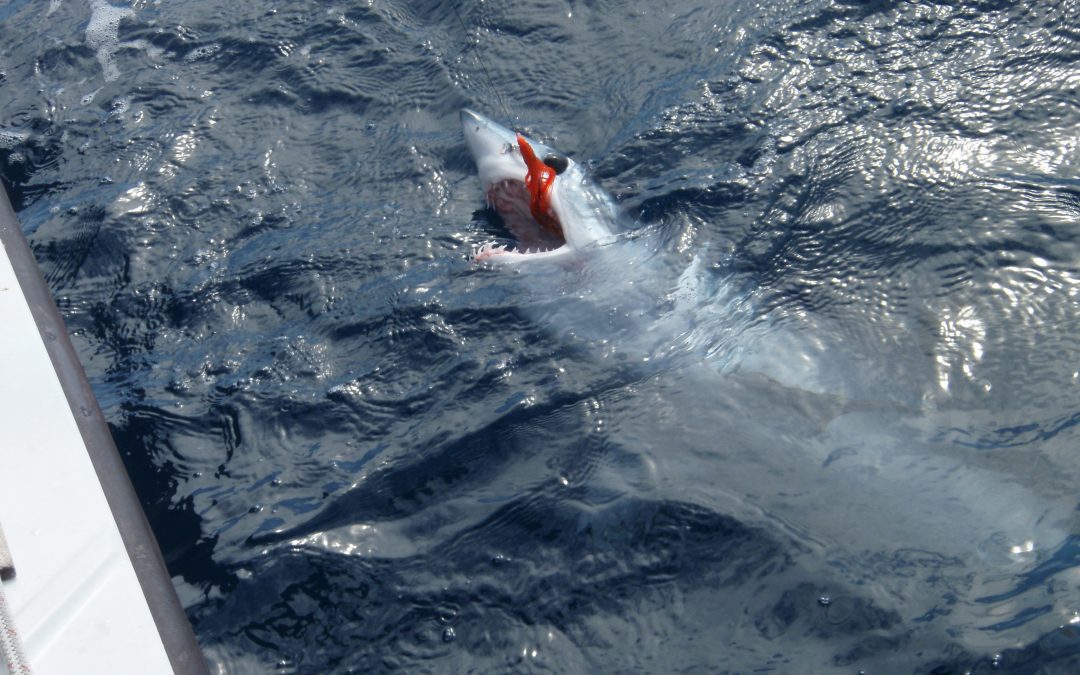 One of the most mind blowing fishing trips I have ever been on was when I went to San Diego, California and chartered a guide to fly fish for Mako Shark. What started off as a calm morning turned to misery for me but ended on one of the biggest adrenaline rushes I have ever had fishing

We chartered Captain Dave Trimble with On The Fly Fishing Charters and we boarded his 20ft boat after we grabbed a nice tuna chumsicle from the marina and headed off into the wild blue of the Pacific Ocean. So as we headed out into the wild west of shark fishing I decided that it would be a good time to have my breakfast of powdered doughnuts and Gatorade and complete forget about my Dramamine (motion sickness pills). My other buddies Matt and Larry had been intelligent and taken theirs before we left the dock. As we got to the area that we were going to be fishing the guide threw what looked similar to a laundry basket off the side of the boat and proceeded to put the giant tuna popsicle inside and create a chum slick to help lure the teeth beasts into the boat.

So now it’s time to sit and wait and have them come to us. Sometimes you’d get excited as you see something coming into the slick and turns out that it’s a sea lion that knows the smell of fish as well. This is a tough situation because they are a source of food for sharks but they are big enough that they will scare most sharks away too. Plus you as an angler can’t do anything to scare them away as they are a protected marine mammal so you have to pick up and move on most of the time.

So with the smell of the ocean and the bobbing of the boat the doughnuts and Gatorade finally decided to make their own appearance and I created my own chum slick off the side of the boat and that didn’t help much. Although I wasn’t feeling at the top of my game as soon as that little pointy fin breaks the surface of the water you immediately have every feeling of sickness disappear and go into hunt mode. As the shark approaches the boat you have your fly rod ready and

The captain will take a fish and throw it out toward the shark. This fish will be hooked to a spinning rod and he will tease the shark toward the boat. As the shark get close to the boat he will yank it off the water and you will cast a giant orange feather with a hook right where that fish used to be. (This is where the fun begins). The shark become angry that he lost his meal and turns and bites the first thing he sees which is your fly. All of a sudden you see your bright orange spot disappear and you strip set as hard as you can and then your reel will just start smoking the line off because you now have hooked the beast.

This is not like any trout you have fought before. Your 100ft of filly line is gone instantly. Just when you think you have the fish under control they shoot 8ft out of the water and do back flips. You’re so amazed at the power of the fish and the aerial show that shark is putting on you completely forget about everything else that’s going on. (Even keeping the line tight). So any form of sea sickness you had will go away instantly. I speak from experience.

Once you get them to the boat you can snap some cool pictures and do a quick release and watch them swim off to catch another day. It brings a whole new view of the creature to your mind after a day of tracking and catching them. They may look like a giant scary mouth full of teeth but you’ll be in awe at the power and purpose that sharks are made for.